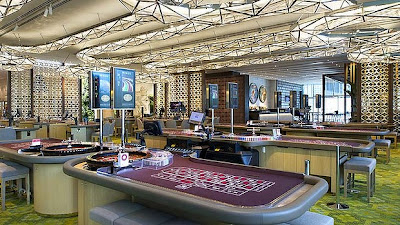 Guests without VIP credentials will be allowed into James Packer's high-roller casino, despite claims strict entry requirements will weed out the general public.

It follows a warning by an independent panel that stringent rules are required to prevent Crown admitting regular gamblers on slow nights.

Crown says its proposed high-end casino at Barangaroo is aimed squarely at affluent gamblers, reducing the risk of problem gambling and leaving the mass gaming market to its rival, the Star. It will cater for international and domestic high rollers, but says half the property's earnings will come from local gamblers. To ensure exclusivity, members would have to demonstrate a record of VIP gaming at other casinos, or be subject to a 24-hour cooling-off period before playing. Their gaming habits would also be reviewed regularly to ensure they should remain members.

But they would be permitted to bring a ''limited number'' of guests who could play tables without undergoing the same checks.

Gambling Impact Society executive Kate Roberts said the loophole ''makes a mockery'' of the so-called strict entry requirements. A Crown spokesman said VIP gaming rooms around the world allowed members to ''enjoy the company of their partner or couple of friends'', and to do otherwise would discourage patrons.

Crown Sydney will model its exclusive gaming area on the Mahogany Room at the group's Melbourne casino. It would not reveal what proportion of gamblers in that room each year are guests. Australian Churches Gambling Taskforce member Mark Henley said allowing members to ''sign in a friend'' meant guests could gamble beyond their means.

''You can lose a lot of money very fast,'' he said. ''One thing that casinos are very good at is creating an environment where people spend far more than they intend to.''

Crown said granting the general public access to the high-roller rooms would run counter to its commercial interests, eroding the casino's exclusive nature.

But the independent panel said ''a concern remains'' about the strength of that incentive if Crown was ''unable to attract sufficient VIP members to fully utilise the facilities'', which would accommodate about 700 players. It said a strong definition of VIP gaming was required.

Crown said members rules, and an absence of poker machines and low-bet tables, would ensure it caters only to wealthy patrons. It said if the same measures were applied to its Melbourne casino, only 5 per cent of local gaming customers would be attracted.

However, anti-gambling groups said an unlimited number of electronic casino games would be as damaging as poker machines, and appeal to local gamblers, not VIPs. Crown said local gaming revenue will likely be higher in Sydney than Melbourne, because of its larger population, higher average household incomes and higher participation rates in other forms of gambling.

The government has given conditional approval to the bid and says rules will be in place to ensure guests are "bona fide". (Fairfax Media)